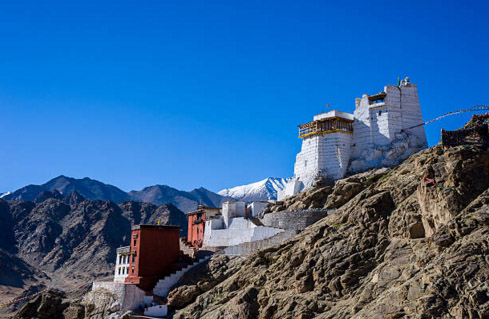 Namgyal Tsemo monastery is situated on a mountain top behind the Leh palace, the monastery offers panoramic views of the surrounding countryside, the gently flowing Indus river and the snowcapped peaks of Zanskar range.

The gompa was founded by King Tashi Namgyal in 1430 AD who was a big follower of Buddhism. As a mark of his respect to Buddhism, the king built the monastery above his palace. Situated at the cliff of Namgyal hill, its architecture is impressive.
View of Leh from the gompa is breathtaking as the view changes with light. The monastery is a favourite with photographers too.


The gompa has assembly hall and temple with frescoes, paintings and statues of Buddhas. The gold idol of Maitreya Buddha (future Buddha) is three-storey high. The monastery is also noted for one-storey high statues of Avalokitesvara and Manjushri.

Down the hill side there is Shankar gompa which is also associated with Namgyal Tsemo monastery. It is a daily ritual followed by monks from Shankar gompa to worship Buddha and light butter lamps at Namgyal Tsemo. Visitors are allowed into the monastery only during morning and evening.
The nine-storey high Namagyal Tsemo palace is also one of the major attractions.

BEST TIME TO VISIT
The best season to visit the monastery is between June and September as rest of the months, roads are snowbound and the region becomes inaccessible.