Ladakh possesses virtually no natural forests, though along riverbanks and valleys some greenery does exist. The lower mountain slopes are sparse but higher up, near the snow line, wild rose, willow and herbaceous plants have successfully colonized the slopes. This is the alpine zone. While soil, wind, precipitation and exposure are important determinants in the arrangement of specific life, the temperature differential due to altitude is by far the most important factor. Because of the decrease in the temperature, vegetation becomes more sparse and stunted as one ascends the slopes.

There have been endless articles describing the beauty of Leh Ladakh. And rightly so, the mesmerising place known for its diverse and picturesque landscapes looks something straight out of a postcard. From desert to mountains, ponds and lush greenery, the place has myriad locations and unique topography that are absolutely breathtaking and synonymous to the place. But what really caught was my attention is the wide range of beautiful birds and animals that add to the beauty of the region.

Each one absolutely stunning, taking my new found love and respect towards wildlife many notches above. I realised each and every animal or bird has something unique to teach us about life and its complexities. All you need to do is open your eyes and learn. 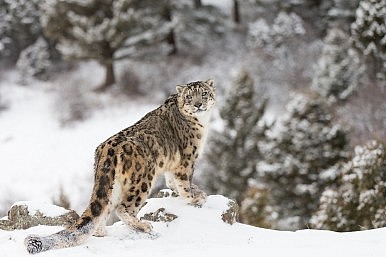 Location:
The Hemis National Park is bordered by the bank of Indus River. The catchments of Markha, Sumdah, and Rumbak, together with the regions of Zanskar Range. The Karakoram-West Tibetan Plateau alpine steppe ecoregion also covered the national park. The area features Alpine Tundra, Meadows, Alpine Shrublands and Pine Forests.

Snow Leopard
Smaller in size than a common leopard, the Snow Leopard is one of the most beautiful cats of the world. Its fur is very luxuriant, soft and pearl grey. It is the king of snow capped mountains and is adapted to survive in some of the harshest and most diffi cult environmental conditions. The head, nape and lower parts of limbs have dark-grey spots. Body and tail is covered with pale rosettes. Under parts are white and unmarked. The thick, furry tail is almost 1/3 of the body length and is wrapped around the body to keep it warm.

Yak
The largest animal of the cold desert is the yak(dong), a wild ox. First described only a century ago by the famous Russian naturalist-- explorer, N.M. Przewalski, the wild yak is definitely more imposing than its placid domestic counterpart. Immensely shaggy and weighing about a tone it has curved horns whose tips can be as wide apart as 90 cm. and measure 76 cm. over the curves. It can easily be distinguished by its long black hair, which is tinged with gray at the muzzle. Spending its summers at a height above 6,000 meters, in winter it moves in herds to the lakes, marshes and lower valleys.

Birding:
The latest survey records about 73 species of birds including both migratory and native species. Hemis National Park is ideal for those interested in studying about the Himalayan and Trans-Himalayan birds of prey. Some of the birds that can be spotted in the national park are Golden Eagle, Lammergeier Vulture, Himalayan Griffon Vulture, Fork-Tailed Swift, Tickell's Leaf Warbler, Fire-Fronted Serin, Red-Billed Chough, Brown Accentor, Streaked Rosefinch, Chukar, Robin Accentor, Himalayan Snowcock, Tibetan Snowfinch, etc.
Animals 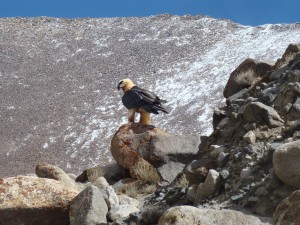 On our way to Khardungla we sighted the lammergeier or the bearded vulture. This absolutely breathtakingly beautiful scavenger has the wing span of about nine feet and only preys mainly on the bone marrow of animals. Other than its hunting skills, this bird is also known for its wooing skills and display of affection. During the breeding season, courting pairs put up a spectacular show, swooping and soaring together, and occasionally interlocking their talons and spiralling downwards almost to the ground. Love definitely can give you wings holds true with them as an example

Asiatic Ibex
The Ibex similar to the wild Goat. It has a long ridged horns curved. The dense and short coat is brownish above with a bluish tinge under parts. Back of legs and tips of the tail is whitish. Females have thin parallel horns.

Blue sheep - Bharal
Bharal is placed between sheep and goats as it's not a true sheep. The coat is of grayish blue color which becomes red brown in summer. The large rounded horns are directed up and sideward and in males while females have shorter, straighter horns. Herbs, shrubs, and grasses constitute the food of this animal. 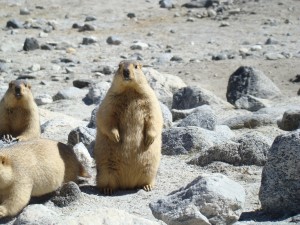 We sighted the marmots at the Hemis National Park on our way to the Pangong Lake. Literally cute balls of fur on first sight, they seem friendly and quite playful. In general they are but if these adorable ground dwelling rodents sense danger from you, beware! They can even bite you, which is likely to cause rabies. Unlike to their dorky appearance, they are quite intelligent and use lookouts to watch predators. These lookouts use the medium of whistling as communication to warn their community.

Himalayan Marmot
Two species of marmots are found in India. Both the species of marmot viz., Himalayan and Long-tailed Marmot are present in Ladakh. The Himalayan Marmot is well adapted to burrow life. The body is squat, limbs are short and the tail is very short. The head is triangular in shape with small neck, eyes have black rings. The whiskers are long. The colour of the body and limbs is pale tawny, much mixed with black on the upper parts. The face and the terminal portion of the tail are dark brown. There are six pairs of mammae extending from the axial to the groin.

Tibetan Antelope - Chiru
Stzos is famous for the finest wool called Shahtoosh means the king of wools. Its color is light brown, with whitish under parts. The upper and lower limbs are both striped with chocolaty lines. Males have long slender horns which are slightly curved forward. The snout is swollen the body is covered with dense wool which is shed during summer. The high altitude adaptation is manifested in the form of inflated snout. Each nostril in the inflated nose has a sac to assist in breathing rarefied air at higher altitudes. The animal feeds on herbs and grasses.

Ladakh Urial
Ladakh Urial is smallest of all the wild sheep. It is also known as Red sheep. Urial has three subspecies viz., Afghan, Punjab and Ladakh Urial. Ladakh Urial is endemic to Ladakh. The horns are back curved, outturned, well wrinkled and slender. The tips of the horns, in Ladakh Urial, point forward. The colour of the body in adult males is copper red. Under parts, lower legs, tail and chin are whitish along with a blackish lateral line. The adult male has a dark ruff from throat to breast. The winter coat is shed with the onset of summer. Males are heavier and larger while females are smaller with shorter horns. Males have a black and white saddle patch.

Tibetan Argali
Tibetan Argali is the largest of all wild sheep. There are eight subspecies of the Argali of which two occur in India viz., the Nyan and Marco Polo sheep. The Nyan resembles an antelope in build with long legs and a massive body. The coat is light brown and darker on the shoulders whereas the rump, throat, chest, belly and inner sides of legs are white. Males have creamy ruffs on their necks. The horns in males are massive, wrinkled and never exceed a single circle. Females have characteristic horns. Winter coat in both the sexes is paler. 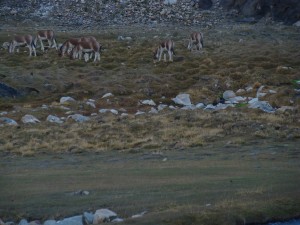 Tibetan Wild Ass
Tibetan Wild Ass was earlier regarded by some as a raceof the Asiatic Wild Ass (Khur). Now it is recognized as a separate species. Found in Indian Trans-Himalaya there are two subspecies of Kiang viz, Western Kiang (E.k.kiang) in Ladakh and parts of Spiti (Himachal) and the Southern Kiang (E.k.polydon) in Sikkim. Kiang has a massive head with powerful body supporting a short black-brown erect mane. It has a narrow mid-dorsal strip without a whitish border. The longish tail ends in long black hair tuft. The hooves are large as in horses. It is reddish-brown on the back and white on the belly. The sexes are alike.

Lynx, Himalayan Lynx
Lynx has a stocky body and strong limbs. The body colour is reddish-grey with spots over the upper limbs. Hind legs are longer than the fore legs. The most distinctive character is long tufts of hairs on the tips of the erect and triangular-shaped ears. It has a short and black-tipped tail. The beard-like ruff around the face is prominent. It is considered as one of the rare cat species in Ladakh.

Wolf, Tibetan Wolf
There are two sub species of wolf in India. The one found in Ladakh or Trans-Himalaya is Tibetan Wolf (Canis lupus chanku). Its fur color varies from sandy-brown to grey-brown, darkgrey or black. Under parts are buff in color. The black-tipped tail is less than half the body length. The winter coat is extremely thick and shaggy. The wolf has strong body, thin legs and V-shaped head.