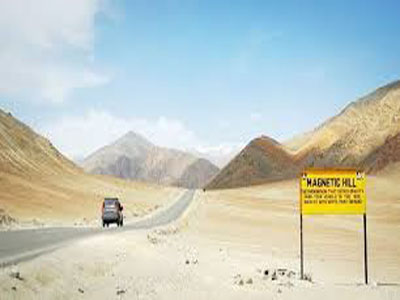 Day 01 : Arrival  Leh from Pune
On arrival at Leh airport, you will be met by our representative at the airport and and Drop to the Hotel. Complete day for the acclimatization & rest as Leh is at an altitude of 3500 Mtrs above sea level. Overnight stay in Leh.

Magnetic Hill
The Magnetic Hill is a near Leh City, and located on the Leh Kargil national highway, about 30 km from Leh, at a height of 14,000 feet above sea level. On its eastern side, flows the Sindhu, which originates in Tibet and goes to Pakistan The hill is located on the Leh-Kargil-Batalik national highway, and is bordered by the Sindhu river.

The Indian Army maintains a Sikh Gurudwara near the hill where Guru Nanak Dev, the first of the Ten Gurus of Sikhism, meditated in the 15th century. Due to both the Gurudwara and the gravity hill, the area has become a popular sightseeing destination.

SANGAM - (Confluence of river Zanskar and Indus point)
Located at 6KM from Nimo valley towards the Leh city on Kargil - Leh highway. If you are travelling to Leh from Manali, you will have to visit this place from Leh city at the distance of just 35KM IF you are goging to Leh to Kargil then stop at this spot which is famously known as Confluence of Indus & Zanskar Rivers. There is special points are developed by the authority so that you can have a beautiful view of this confluence from the height. Zanskar river is shiny blue in colour, on the other hand Indus looks a little green. In the Winter Season - Zanskar freezes completely during some part of the winter to enable the Chadar trek, the Indus keeps flowing though it too would have started to freeze in patches. Summer or winter, this confluence makes for a great sight. 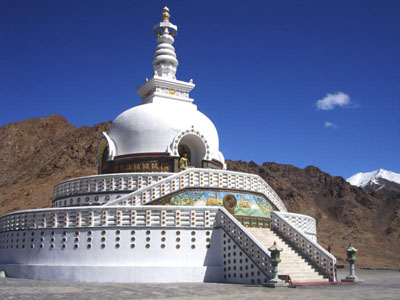 Shanti Stupa Leh
Shanti Stupa is a Buddhist white-domed stupa on a hilltop in Chanspa, Leh district, Ladakh, in the north Indian state of Jammu and Kashmir.

A relatively new addition to the rocky skyline around Leh is the toothpaste white Shanti Stupa above Changspa village, 3km west of the bazaar. Inaugurated in 1983 by the Dalai Lama, the "Peace Pagoda", whose sides are decorated with gilt panels depicting episodes from the life of the Buddha, is one of several such monuments erected around India by a "Peace Sect" of Japanese Buddhists.
This stupa is a round structure and direction is marked to go around in clockwise direction. A platform is there in front of the Stupa and from here good view of Leh town and surrounding areas are available. Markings are there showing direction of Shindu Ghat and Khardungla pass on the outer wall of the stupa. As per the direction and details given the aerial distance of Khardungala Pass is 9.50 KM ( By Road it is 38 KM )

Day 03: Leh to Nubra via Khardungla Pass - Hunder (120 Km / 4 - 5 hrs)
After breakfast, drive to Nubra Valley, also known as Valley of flowers via Khardungla, the highest motorable road in the World, (18,380 ft).
Visit to Diskit Monastery after drive to Hunder.  On your arrival in Hunder check in the camp.
After enjoying lunch proceed to enjoy walk on the banks of Shayok river, you can also enjoy a ride on double humped camel on the Sand Dunes between Deskit & Hundur Village. Overnight stay in Hunder.

Diskit Monastery (Leh)
Diskit Monastery also known as Diskit Gompa or Diskit Gompa is the oldest and largest Buddhist monastery in the Nubra Valley of Ladakh, northern India.
Diskit monastery is situated in the Nubra valley of Ladakh. Also known as Diskit Gompa, the Buddhist center is one of the oldest and largest monasteries in Leh Ladakh. The Diskit monastery was founded by Changzem Tserab Zangpo in the 14th century, and at present stands atop a hill above the plains of Shayok river. The prime attraction of the Diskit monastery is 100 foot high Maitreya Buddha statue, which was inaugurated by the holy Dalai Lama. From the top of the Gompa, where the divine statue is settled, one can have a panoramic view of the Nubra valley. 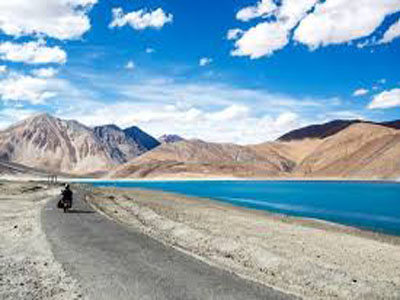 Hemis monastery
Hemis monastery is one of the popular tourist destinations in Ladakh. This monastery is stationed on the west bank of the peaceful river Indus. The location lies 45 km from Leh city. This is the largest as well as amost favored monastery in Ladakh was constructed in 1672 AD under the reign of King Singge Namgyal. Hemis monastery host an annual festival called Hemis Tsechu attracts plenty of tourists across the globe. During this colourful day-long festival the local resident lamas glorify the victory of good over bad and perform dance wearing holy masks.

Thiksey Monastery
Thiksey Monastery is a convenient 45 min drive from Leh - the main city in Ladakh. There is good choice of accomodation available in Leh. Alternatively, one can stay at the excellent Chamba Hotel at the base of Thiksey monastery and run by 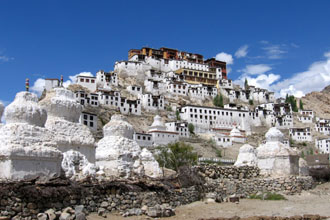