Guru Nanak is venerated by Tibetan Buddhists such as Nanak Lama and Guru Gompka Maharaj. This historical Gurudwara was built by the Indian army who also maintained it. It is said that during his second journey, Guru Nanak Sahib stayed here in 1517. This is when he was on his way back from Sumer Mountain. He travelled all the way from Nepal, Sikkim, Tibet and Yarkand to Leh. Local Buddhists of Leh spent a lot of time conversing with him and eventually honored him as Nanak Lama.

Hundreds of devotees visit Gurudwara Sahib and worship a pathar (rock) that carries imprints of Guru Nanak Dev Ji's head and body. It looks picturesque in this desert country and is surrounded by huge peaks all around. The Gurudwara has now become a famous tourist attraction in Leh and is venerated by people from all religions. Sikh devotees gather here and offer prayers. Calm and peaceful, this Gurudwara is maintained by the Indian army. Langar along with hot tea is provided inside the premises. 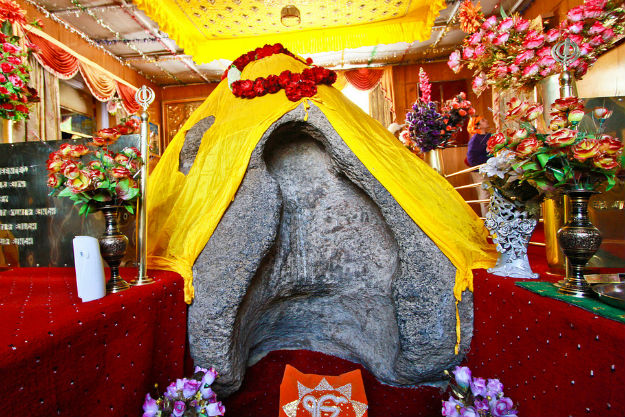 It is believed that there once lived a wicked demon who frightened local people of this place where the Gurudwara is now located. It is said that when people prayed, Guru Nanak heard it and came to help them. He started living below the hill on the banks of river where that cruel demon lived. Guruji calmed people and became popular among them. On seeing his popularity among local people, the demon decided to kill Nanak Devji.

One morning when Guru Nanak Ji was meditating, the demon rolled a large pathar (boulder) from the hilltop to kill him. The boulder with a full speed roar down the hill, but when it came near the Guru and touched his body, it turned into a warm wax and halted against Nanak’s back. Guruji was undisturbed and unhurt so he continued meditating. The angry demon then tried to move this rock with his right foot. Because it was softened like wax by then, his foot got fixed in it. When the demon pulled his foot out of the boulder, he was astonished to see an impression of his foot on this stone.
The demon then realized that he is powerless in comparison to the great spiritual Guru. He fell in front of Guru Nanak Dev and begged to forgive him. Guru Nanak asked him to leave all his wicked habits of terrifying people and live a life of a noble man. This advice changed the life of the wicked demon and he left all evil deeds. The demon now started serving humanity in all earnest.

As time passed, the boulder was forgotten. However, it was rediscovered in 1970s during the creation of Leh - Nimu road. Because of this boulder, construction work of the road came to a halt and it couldn't be removed despite all efforts. An army officer did not have the vision to not bother the rock. However, when many people of the army were unable to push the boulder aside, lamas came and stopped them from doing so. They told the officials about this boulder and Nanak Lama. Thereafter, army officials, lamas and local people got a Gurudwara constructed here, which is now known as Gurudwara Pathar Sahib.

Architecture
Gurudwara Pathar Sahib comprises a huge hall and the holy stone with imprints of Guru Nanak DevJi placed in the middle. A langar is available within the Gurudwara all round the clock.

By Air
Leh, situated at about 25 miles from the Gurudwara, is the nearest airport. One can take taxi or a bus from Leh Airport to visit GurudwaraPathar Sahib. Leh received flights from Delhi, Jammu and Srinagar. Srinagar Airport is another option to reach here. This has flights connecting Leh to Mumbai, Delhi, Bangalore, Leh, Jammu and even Dubai.

By Rail
Kalka railway station is the closest from this shrine. Taxis or buses can be hired to arrive at Manali via Shimla. Regular taxi and bus services are available to take devotees from Manali to Leh. From Leh one can hire another taxi or bus service to reach Gurudwara. Another good option to reach there is Jammu.

By Road
There are two ways to reach Gurudwara Pathar Sahib via road. One road way is from Srinagar via Kargil and the other option is from Manali via Sarchu and Dharchu. Both roads are blocked at times due to snowfalls or landslides. Therefore, the routes are opened from June till October. Regular bus and taxi services are available to reach Leh. However, for a visit to Gurudwara Pathar Sahib, one has to hire a taxi service.