Diskit Monastery also known as Diskit Gompa or Diskit Gompa is the oldest and largest Buddhist monastery in the Nubra Valley of Ladakh, northern India. 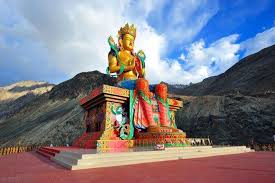 Diskit monastery is situated in the Nubra valley of Ladakh. Also known as Diskit Gompa, the Buddhist center is one of the oldest and largest monasteries in Leh Ladakh. The Diskit monastery was founded by Changzem Tserab Zangpo in the 14th century, and at present stands atop a hill above the plains of Shayok river. The prime attraction of the Diskit monastery is 100 foot high Maitreya Buddha statue, which was inaugurated by the holy Dalai Lama. From the top of the Gompa, where the divine statue is settled, one can have a panoramic view of the Nubra valley.

The Diskit monastery was founded by Changzem Tserab Zangpo in the 14th century. The history of the Nubra Valley and the monastery could thus be traced from 14th century onwards. Ladakh was then ruled by King Grags -pa-'bum -lde (1400 -1440) and his brother, who unsuccessfully attempted to usurp Nubra Valley, which was under a local ruler named Nyig - ma - grags -pa. The local ruler assisted a Gelugpa order advocate to build the monastery at Diskit and deify the idol of Tsong Khapa, the founder of the Gelugpa sect, in the monastery.